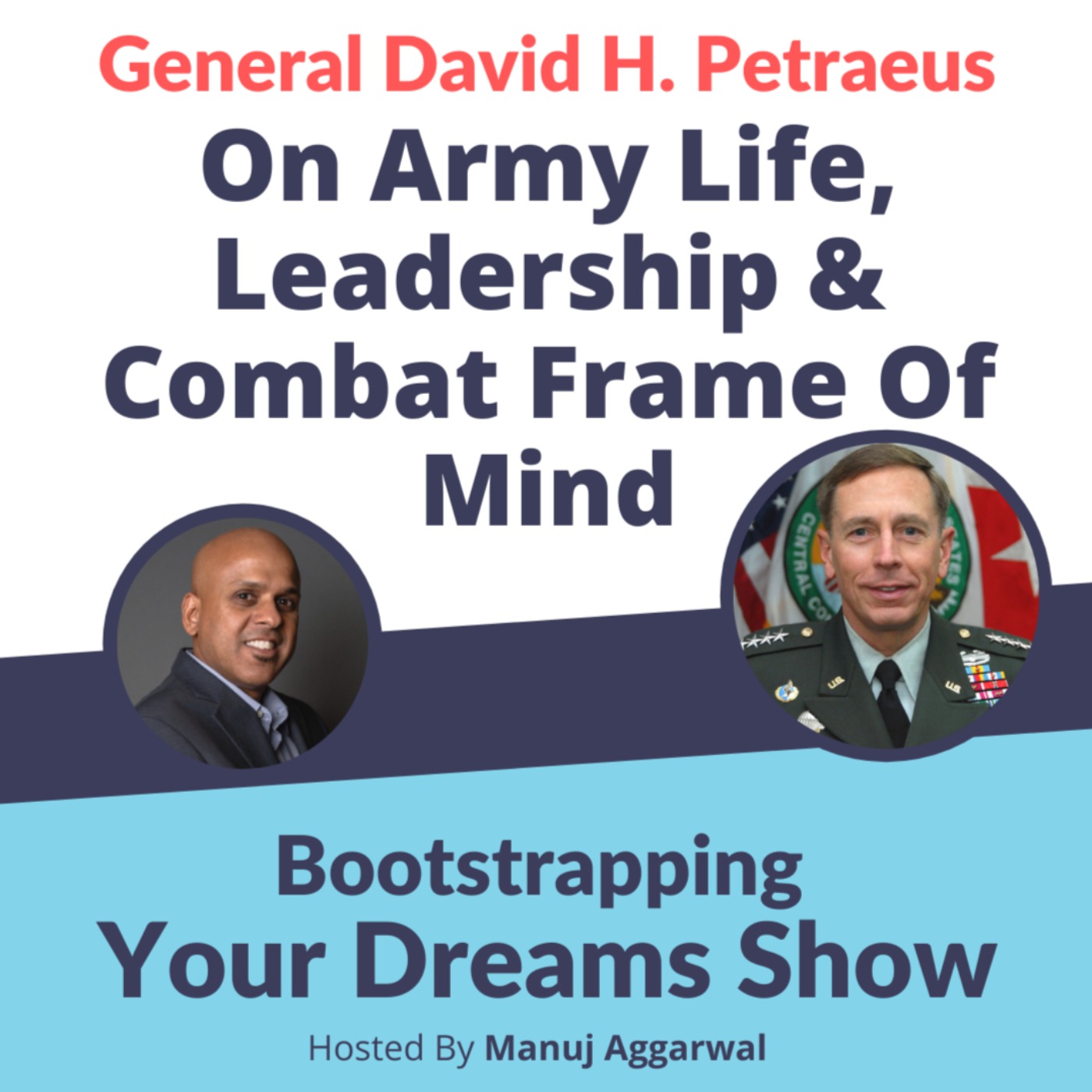 Welcome to this episode of “Bootstrapping Your Dream Show”. I am Manuj Aggarwal, and I will be having a very interesting conversation with General David Petraeus.

Gen. Petraeus served over 37 years in the U.S. military, including tours in Cold War Europe, the United States, Central America, Haiti, Bosnia, Kuwait, Iraq, Afghanistan, and the greater Middle East. He culminated his military service with six consecutive commands as a general officer, five of which were in combat, including command of: the 101st Airborne Division (Air Assault) during the fight to Baghdad and the first year in Iraq; Multinational Security Transition Command-Iraq over 15 subsequent months; Multi-National Force-Iraq during the Surge from February 2007 to September 2008; U.S. Central Command from 2008 to 2010; and the International Security Assistance Force in Afghanistan from 2010-2011.

Gen. Petraeus graduated with distinction from the U.S. Military Academy, subsequently earned a Ph.D. from Princeton University, and has held academic appointments at six universities. He has received numerous U.S. military, State Dept, NATO, and UN medals, including four Defense Distinguished Service Medals, the Bronze Star Medal for Valor, and the Combat Action Badge, and he has been decorated by 13 foreign countries.

Following his service in the military, Gen. Petraeus served as the Director of the CIA, leading the Agency during a period that saw significant achievements in the global counter-terrorism effort, development of a strategic plan for the Agency, and an initiative to increase worldwide human intelligence coverage.

General Petraeus joined KKR in June 2013 as Chairman of the KKR Global Institute. He went on to become a Partner at KKR in December 2014. The Global Institute supports the KKR investment process and KKR’s portfolio companies with an analysis of geopolitical, macro-economic, environmental, social, and governance issues. General Petraeus is also a member of the board of directors at successful companies like Optiv and OneStream. David is also a successful venture capitalist himself, a Visiting Fellow at Yale University’s Jackson Center, and an Honorary Professor of International Security at the University of Birmingham (England).

Glad to have you on the show, General Petraeus. Welcome!

And his entrepreneurial journey here: https://www.InnerGet.com

Thank you for tuning in!

Do you have any feedback or thoughts? Please leave a comment!

Take care and see ya!

call us for help

I worked with TetraNoodle at Wiivv for 1 year, during which Manuj (TetraNoodle) quickly hired a strong team, launched the platform, and scaled it very effectively. The ability to work under pressure is one of TetraNoodle’s strengths.

Manuj provided us with invaluable service that aided architect our next learning management system and put the foundation pieces together. He worked extremely well with the internal team and external vendors. He always asked the right questions, and helped focus us on the big decisions that needed to be made. Highly competent and a pleasure to work with as well!

As part of the team delivering software releases for Pearson Education, I had the honour of working closely with TetraNoodle as the lead Architect on the projects I managed. Manuj (TetraNoodle) brought a very pragmatic, collaborative attitude to the work we did and was able to lay out the options in clear business terms for the program team while also being able to stay on top of the technical issues with a development that numbered over a hundred. It was a pleasure to work with TetraNoodle and I look forward to a time when we can work together again.